Day five in Scotland started very early.  It also started with a traditional Scottish breakfast.   For those who haven’t experienced this, here’s what was on the menu: haggis, black pudding, baked beans, cooked tomatoes, sautéed mushrooms, cooked bacon (closer to what I know as country ham), eggs, fruit, cheeses, cereal, etc.

Yeah, that’s right, haggis was on the menu.  It was on my plate too!  I have to say I love the stuff now!

After breakfast we headed over to the car park to grab the car, and we headed back to Loch Ness.  We wanted to check out The Loch Ness Centre before making our way to the Isle of Skye.

Visiting the Loch Ness Centre wasn’t like visiting the castles, or my family’s home town, but it was something we had to do.  Call it a tourist trap.

Luckily we did get a better shot of Nessie on the 5th day.

We only stuck around an hour, because we had some place a little more awesome to see.

Eilean Donan Castle  I’m 99% sure you’ve seen this castle before.  It was either on the front cover, or the back cover of every book about traveling to Scotland.

It was on just about every website about Scotland.

And last, and most certainly not least.  It was featured in the first Highlander movie.  And we were there.  But there can be only one… 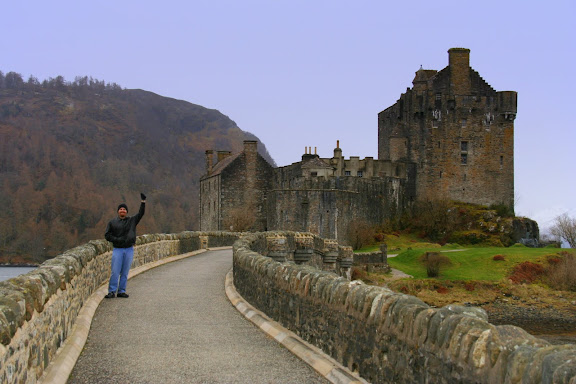 I need someone to Photoshop a claymore into my hand.  Anyone interested?

We spent a couple hours walking the grounds before we headed out to see the Isle of Skye and Dunvegan Castle.  Check out Penny’s driving album.  By the 4th day I was pretty comfortable driving on the left.  But I wasn’t about to try to take photos while driving.

We got to Dunvegan castle right around noon.  We strolled up to the gates and saw a simple sign, closed until April.  It was March.  We’d driven a little over two hours to see a closed sign.

Fortunately, Penny was able to see coos just after we were turned away from Dunvegan.  It made the whole drive worth it to her.  I was a little less enthusiastic.  We headed back to Inverness and things were going easy… until we hit a blizzard about 2 hours from inverness.  It slowed us down to about 30 for most of the trip.

But about 1/2 an hour from the hotel, we got onto the leading edge of the storm, and it was clear again…At least until the next morning, when we were due to head down to Glasgow.  But I’ll save that for next time.